The Originals, Human Hotels & Resorts remains true to its values in serving its guests during the health crisis 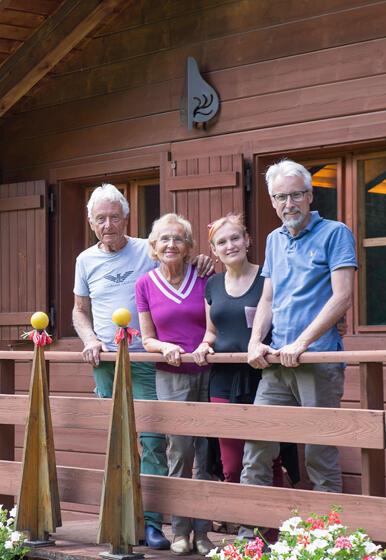 The setting of the Aosta Valley mountains. A place of relaxation and tranquillity. A real family home. Welcome to Angelo, Irma, Andrea and Stefania Celesia’s hotel.

Angelo and Irma’s home was never empty at weekends. Friends, family, acquaintances, there was always someone to host. This was a real pleasure for the couple who in 1979 decided to combine business with pleasure. This is how the Chalet-Hotel Eco Wellness Hotel Notre Maison, The Originals Relais came into being in 1979 in the small village of Cogne in the heart of Gran Paradiso national park (Aosta Valley). Their own paradise with a hotel and restaurant. Their son Andrea and daughter Stefania grew up and joined the venture. The family business has evolved (construction of a solarium cabin, enlargement of the hotel, installation of a spa). It has earned its 3 stars and its reputation as a real corner of paradise that respects both its guests and the surrounding nature. In 2015, a biomass system was installed to ensure the site is self sufficient for heating and electricity. The family has also introduced a shuttle service using an electric car. Come to the Italian Alps and enjoy this eco wellness hotel.

The Chalet-Hotel Eco Wellness Hotel Notre Maison, The Originals Relais’ 30 rooms are split into 4 categories: Suite, Mini-suite, Superior or Standard. The decor is plain but the wooden furniture, in the chalet spirit, makes the rooms welcoming and accommodating, giving them an authentic feel. Real cosy burrows that can accommodate up to 4 people.

Enjoy the friendly atmosphere in the hotel’s bar, La Cheminée, to have a drink or try a variety of teas. Feeling peckish during the day? Head to the solarium, the huge outdoor cabin where you can snack and meditate facing the mountain. For lunch and dinner, the restaurant’s menu will satisfy all tastes and all appetites with traditional recipes of the Aosta Valley and dishes inspired by classic and international cuisine. In this typical mountain chalet setting you will start your day with a generous and varied breakfast buffet.

While Irma no longer officiates in the kitchen as before, Angelo is still responsible for cooking the meat ‘alla losa’ (grilled on the slate in front of the customer). The flavours are authentic and traditional, prepared mostly using fresh, local and seasonal products. The must-have dish: gnocchi with tomme and thyme, a family recipe. Full-board and half-board available.

Standing over 4,000m high, Gran Paradiso is the guardian of the national park of the same name, where the Chalet-Hotel Eco Wellness Hotel Notre Maison, The Originals Relais is located. Spend a weekend or a few days in this other paradise which will open its doors to a world of wellbeing, relaxation and discovery.

This small artificial lake, created in 2016, is filled with warm water at 35°C. It has an area with hot tubs and 4 massage jets for the back and neck. A little oasis of wellness in the great outdoors.

The idea to create a library was Stefania’s (‘the bookworm of the family’). If it takes your fancy, you can also borrow some books during your stay. Chess fans will find a giant board in the garden. And the hotel has electric bikes available for those who wish to explore the region on two wheels.

A former royal hunting reserve, Gran Paradiso National Park is home to some incredible flora and fauna: birds of prey, lynx, marmots, endemic flowers and of course ibex goats, symbols of the park. Cogne, the village a stone’s throw from the hotel, is renowned for its lace, the expertise for which would have been imported from Cluny Abbey in the 16th century. At Pont d'Aël don’t miss the Roman viaduct dating from the year 3BC and reaching 56m in height. Roman ruins in Aosta. Closer to the hotel is the magnificent Introd Castle, a testament to the history of Aosta Valley which dates back to the 13th century.

Want to hold a work meeting for a small committee in an exceptional setting? The Chalet-Hotel Eco Wellness Hotel Notre Maison, The Originals Relais can meet your needs with its pretty arched cellar with exposed stones and coloured windows allowing natural light to enter. Not too large, this room nevertheless has all the equipment necessary for your work events.