The Costa Brava may be best known for its spectacular beaches and secluded coves, but it also has a rich cultural history. One of the 20th century's finest artists, Salvador Dalí, lived his life here. Join The Originals Hotels in learning more about his life and work in this stunning part of the world. Unlock our Smooth Rate and stay at The Originals Hotels at the best price!

The Theatre Museum in Figueres

Start your journey visiting Salvador Dalí museum in the picturesque town of Figueres. You can't miss this enormous, oddly-shaped red building, which is the largest surrealist work in the world. Opened by Dalí in 1974, it houses a grand collection of his works - but some consider the building itself to be his masterpiece.

It's easy to spot Dalí's house; it's the only one in this quiet fishing village with an enormous egg on top of the roof! Dalí and his wife, Gala, moved here in 1930. Aside from their years in exile during the Spanish Civil War, they remained in Portlligat until Gala's death in 1982.

Inside, the house is divided into the living area, which reflects Dalí's daily life, and his artistic study. You can see the spot where he produced many of his finest works, overlooking the beautiful views of the Mediterranean sea, and watch short films about his life in Portlligat.

The Gala Dalí Castle in Púbol

The Castell Gala Dalí was developed in tribute to the late Gala. Dalí bought it in 1969, but it was not until his wife's death that he transformed it into a spectacular mausoleum. Inside are more of his works, with guided tours that will explain how Dalí turned this ruined castle into a monument to his love and muse.

Where to stay on the Costa Brava

Almadraba Park Hotel, The Originals Relais is in the town of Roses, just 20 minutes from Figueres. It has a spa and a saltwater swimming pool, and its two delicious restaurants - one formal, one more casual - offer wonderful seafood and local Catalan cuisine.

In nearby Lloret de Mar, Sant Pere del Bosc, The Originals Relais is ideal for visitors who want to keep busy. Cycling, horse riding and watersports are all on offer here, along with cultural tours that will uncover the secrets of the Catalan coast.

1 HOTELS SELECTED FOR YOU 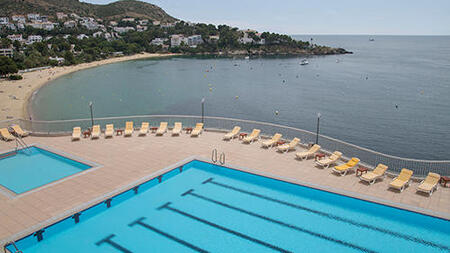