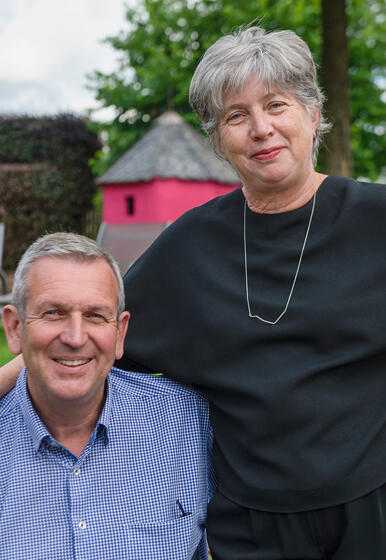 The calm of the Belgian countryside. The flavours of a gourmet restaurant. A warm family atmosphere. Welcome to Thierry and Paule Neyens's hotel in Arlon.

“ Constant innovation, knowing how to differentiate ourselves, attention to detail. A small hotel with a big hotel’s attitude! ”

The era between the wars, when bacon omelettes and coffee were served in Arlon’s rustic Peiffeschof, is long gone! Converted into a high-end hotel and inn following the liberation, the establishment began a new chapter in its history with the arrival of Thierry and Paule, in the year 2000. One year later, after major restoration, Hostellerie du Peiffeschof, The Originals Relais, opened its doors once again. Paule, a former primary teacher, ensures that everything runs smoothly at this 3 Star hotel and the guests are happy. Trained with the greatest Michelin-starred chefs, Thierry is the boss in the kitchens. The establishment soon won its three stars, and the restaurant a strong reputation, and the nine rooms are never empty. Its success comes down to attention to detail, friendliness, the family atmosphere, and the efficiency of its young, dynamic team. The only disappointment here is when you have to leave.

The nine rooms at the Hotel Hostellerie du Peiffeschof, The Originals Relais, were all renovated in 2017. The décor is simple, understated and efficient, with the emphasis on wood and the theme of nature. The beds’ headboards are decorated with the delicate colours of sprays of lilac or hornbeam, or poppies and meadow flowers. The spacious rooms are soundproofed, fully equipped, comfortable and warm. They offer easy access for those with reduced mobility.

A generous buffet breakfast is set out every morning in the hotel’s new “Vintage” area. You can look out onto the establishment’s superb garden while enjoying delicious regional, organic and artisan produce. At lunch and dinner, you can place your trust in Thierry who will offer you gourmet brasserie cuisine accompanied by a wine list that he is always happy and proud to tell you about. On fine days, the shady terrace surrounded by nature awaits you. Make yourself comfortable, and savour both the moment and your meal! The hotel also has a bar.

Trained with the greatest chefs, Thierry is fully aware that excellence in his profession demands top-quality, seasonal products, a focus on flavours, good knowledge of traditions, and a subtle dose of imagination. With its mix of updated classic regional dishes and contemporary suggestions, the menu will be a hit with fans of authentic cuisine and lovers of new flavours alike.  Please note: closed on Saturdays, Sundays and Bank Holidays.

Close to France, Germany and Luxembourg, Arlon is ideally located for the major routes through Europe. The Romans got it right when they built the town here in the first century AD. They left, but the countryside remained. Peaceful and restful... a delightful stopover in Belgium.

Walks in the nearby forest; Arlon, one of Belgium’s oldest towns where you can visit the Gallo-Roman museum; Orval abbey with its medieval ruins, its new abbey and its brewery founded in 1931; Mardasson museum in Bastogne, devoted to the Second World War; the old town of Luxembourg 30 minutes’ drive away.

"Wonderful stay in a peaceful place"

This is a true gem - a small stylish but not overloaded three-star hotel in one of the most quiet places I'have ever been in Belgium, just minutes away from downtown Arlon, and next to a variety of picturesque nature places both sides of the Belgian-Luxembourg frontier - ideal for hiking.