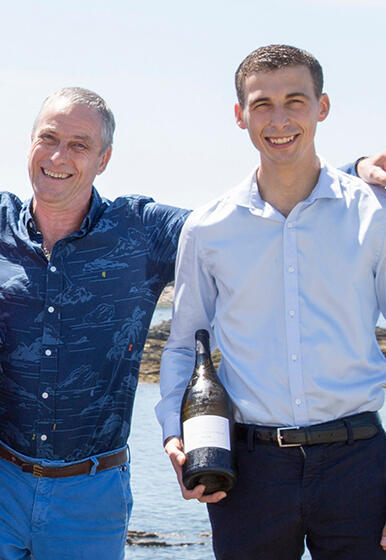 A charming hotel at the water's edge. A gourmet restaurant. Comfort, calm and serenity. Welcome to Pierre-Yves Roué’s hotel in Brittany.

“Whatever the service we're offering, we always put our guests’ satisfaction first.”

At the age of 18, for a project at the Bordeaux Business School, Pierre-Yves created… a restaurant. However, it was not until his forties, with a career that began in a major telecoms company, that he made this project a reality. That was in 2004. He fell under the spell of a small family hotel in Névez, a few kilometres from Concarneau in his native Brittany. Although in poor condition, it had a superb view, with the horizon as its focal point. Work was undertaken to modernise the hotel (which now has 17 rooms) and its restaurant, which has had a Michelin star between 2010 and 2018. Pierre-Yves is thrilled at this, having discovered the red guide in his childhood. “At first, you hear about the Ar Men Du restaurant by word-of-mouth, and come for the view, then you come back again for the gastronomic journey, the gourmet dining, and the kindness of the team.” Some say that the Ar Men Du, The Originals Relais distils all that’s best about Brittany. Simple, friendly, generous and just delightful.

The 17 rooms and suites at the Ar Men Du, The Originals Relais were all renovated in 2017. With their nautical feel, views out to sea, and smart décor, they offer undiluted charm and comfort. Their “little details”, as Pierre-Yves likes to call them, are the finishing touch. “A tray of Breton specialities on your arrival, a raised bed to hide your luggage, the quality of the bedding and the mattress topper, and the beach basket with its large towels.”

The breakfast buffet consists of organic local produce, with a wide choice of sweet and savoury options. Your hot drink is served at your table, giving you the chance to enjoy the panoramic sea views from the veranda for a while longer. At lunch and dinner time, the restaurant’s gourmet flavours will sweep you off your feet. The fresh produce, clever flavour combinations and attentive staff make this gourmet dining experience a moment of sheer pleasure.

Talent, excellence, and the flavours of land and sea earned this Breton restaurant its first Michelin star in 2010. Sourcing his supplies from local producers, the chef preserves the character of the produce he works with, with very gentle cooking and an emphasis on vegetables cooked to order. This is modern, creative, gourmet cuisine.

The restaurant has received a green star in the Michelin Guide and a label 'sustainable gastronomy" for its commitment to sustainable development in kitchen.

La Terrasse is open all day, serving a menu of hot and cold drinks, ice creams, the pâtisserie chef’s daily delicacies, aperitifs, and more. All to be enjoyed on the terrace or on the veranda, both looking out to sea.

In the heart of Brittany's riviera, the Ar Men Du, The Originals Relais offers a magical interlude deep in a region rich in wonders. Pierre-Yves and his team will be delighted to advise you on places of interest.

Make the crossing to the islands of Glénan or Groix. Travel Brittany’s roads from the Pointe du Raz to Carnac, and from Locronan to Quiberon. Sample the good life in Pont-Aven, enjoy all the fun of the seaside at Port Manec’h and the little green paradise of Kerdruc, explore the little port of Douelan-sur-mer where the fishermen are always ready to recount some local folklore. Walkers can take advantage of the low tide to reach the Île de Raguenez opposite the hotel, or walk part of the famous Sentier des Douaniers which winds around Brittany's coastline.

"The most beautiful place in the world..."

With views like that out of every window, it's the best possible starting point to any holiday...

Your business events deserve an exceptional setting, so get in touch with the Ar Men Du, The Originals Relais without delay. They will work with you to design a tailor-made solution for your study days and residential or semi-residential seminars. The hotel offers two seminar rooms, and you’ll appreciate the flavours of its gourmet restaurant, its modern facilities, a large free car park for your vehicles, and, should you require it, a shuttle service to and from Lorient airport and the stations at Quimperlé and Lorient.

The restaurant can be rearranged to seat around 20 people.

One of the hotel's lounges is available for smaller meetings, seating 5-6 people.