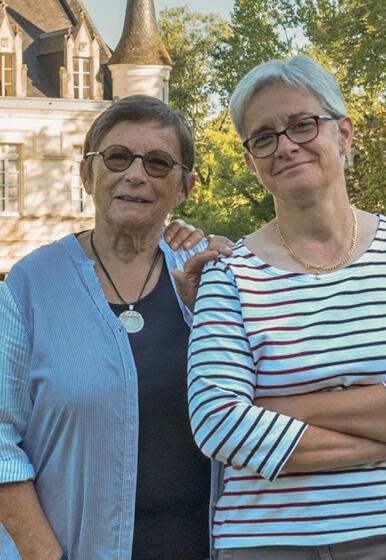 Luxury and sophistication, the charm of the Charente countryside, attentiveness and romanticism. Welcome to Luce and Jean-Michel Bodinaud's hotel.

“General de Gaulle and Margueritte Yourcenar have stayed in the castle. This place is charged with history.”

In the heart of the Charente Limousine region, this place, managed by Luce and Jean-Michel, is charged with history. A unique place, this Renaissance castle (rebuilt at the end of the 19th century) became France’s first castle hotel in 1937. Long before that the estate belonged to François I. “These premises have a soul,” say the owners. Jean-Michel, like his parents and grandparents before him, has preserved the authenticity of the Château de Nieuil, The Originals Collection. Luce and Jean-Michel have brought this 4-star hotel in Poitou-Charentes into the 21st century but gently, by subtly combining the past, traditions and modernity. All with elegance and style, as shown in the 11 rooms and 3 suites, all large, comfortable and harmonious. A gourmet restaurant opposite the hotel will make your stay memorable.

“The art de vivre here is in harmony with the nature. It’s also a subtle blend of traditions, the charm of yesteryear and modernity,” explain Luce and Jean-Michel. This harmony is clear to see in the 11 rooms and 3 suites. Their classic style is brightened up by contemporary items and works of art. ‘Louis XIII’ meets the 1930s with a mixture of gentle and sparkling decor. The windows look out on an idyllic setting. “The authenticity of the premises remains our priority,” say Luce and Jean-Michel.

The Château de Nieuil, The Originals Collection estate has a very beautiful gourmet restaurant set in the former stables. You can also enjoy Charente’s gentle way of life at the hotel’s bar in one of the castle’s lounges. In the morning you can try the property’s honey, the traditional Dordogne toast, jams, compotes, cakes and homemade yoghurts. A large warm breakfast buffet is served in the dining room with eggs freshly prepared by Cathy. You can also order it to your room.

This restaurant in the Château de Nieuil stables combines trendy contemporary style with old stones. When it comes to the food, the chef Pascal Pressac cooks up instinctive dishes using fresh and local market produce and vegetables and herbs from the vegetable garden. In good weather you can sit on the beautiful terrace in front of the castle. Try the araignée de cochon pork chop glazed with local honey, braised chicory with Angoumois saffron, the surprising cheesecake with Manslois cheese and chocolate and the yuzu coulis.

Luce and Jean-Michel’s hotel is ideally located in the heart of Charente. A great place to relax in a 40-hectare estate with cultural and tourist attractions, including an art gallery opposite the castle.

Cognac and its magnificent museum are one hour’s drive from the hotel. A museum devoted to Cognac and its history. Partly set in the Perrin de Boussac hotel (1567) and built onto 17th-century remains, this museum give a fascinating retrospective of the jobs and techniques related to this brandy. The exhibition is visual, olfactory and audio allowing you to appreciate over one thousand products from the region and showing the expertise and creativity of the cognac industry.

A trip to Angoulême will undoubtedly take you to the Cité Internationale de la Bande Dessinée et de l’Image (International City of Comics and Image). Here you can learn nearly everything there is to learn about comics at the two sites either side of the Charente river. They are joined by a footbridge featuring a statue of Corto Maltese. First there is the library, a real temple of comics, with nearly all French comics published since 1946. Then there is the comic book museum showing the major evolutions in this art from the 1830s up to this day.

This small commune, around 1.5 hours’ drive from the hotel, has a mysterious and fascinating underground church. St John’s church is one of a few rare monolithic churches in France, and the tallest. It was carved into the hill’s limestone rock from the 8th century and has 17-metre-high Roman arches, above a monumental reliquary in the form of a Holy Sepulcher and a necropolis, also hollowed into the rock.

All was absolutely perfect.

"Great stay at the Chateau"

We had a lovely two night stay here on our journey back to the UK. The team were very friendly and welcoming and although the restaurant was closed during our stay the first night's recommendation was helpful and on the second night sylvie prepared a lovely meal for the guests. We will definitely come back!

Super location. What a welcome! (Special thanks to Sylvie). Nice castle, clean, with beautiful rooms. An outdoor swimming pool, an art gallery, a retaurant and many cozy places to relax around the castle. Secret tip: look for the pond of the castle.

Sorry you've used a red/black combo for stars and I am colour blind and cannot distinguish what I have put. But for me you are 5 star!!

The hotel, in its idyllic setting, has 3 fully-equipped seminar rooms.

The hotel have 3 seminar rooms. The first can hold up to 40 people. The second accommodates 20 people. And the third, 10 people.