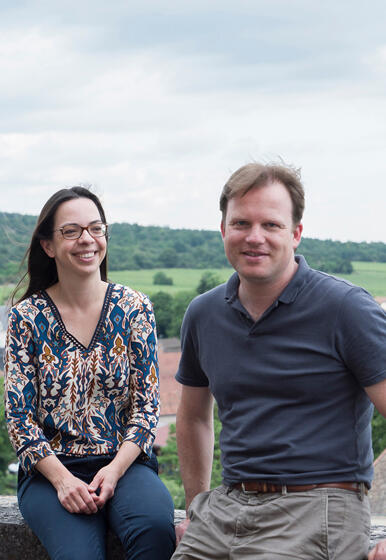 An elegant château surrounded by vineyards. A romantic and historic setting. Nice and friendly service. Welcome to Mark and Metha De Vries’ hotel in Bourgogne.

“Providing a luxurious, green, friendly and welcoming setting for an unforgettable stay.”

How could you not fall for this elegant place on the hills of the village of Rully? This is surely what Mark and his wife, a young Dutch couple, said to each other when they discovered Saint-Michel château, built in 1863. He managed several gîtes in the Netherlands while she was working in public healthcare. They bought the estate in 2012 and began modernisation work without affecting what gives the place its soul and charm, the Napoleon III style. The estate became the Château Saint-Michel, The Originals Relais in 2016 with 15 rooms including 7 suites, all as luxurious as each other. Our Rully hotel, in the region of Bourgogne, has retained elements of its glorious past such as stylish furniture, gilding, marble, parquet flooring, mouldings. From the 21st century it has comfort and modern equipment. “Our guests often tell us they only have one regret, that they can’t extend their stay. ”

On one side is the 3-hectare park and on the other are vineyards and the roofs of the village of Rully. Wherever you look there is postcard scenery which you can see from the 15 rooms (including 7 suites) of the Château Saint-Michel, The Originals Relais. Very spacious with very high ceilings and a clever combination of 19th-century elegance (furniture and materials) and contemporary simplicity (colours), these sophisticated rooms are ideal for peaceful nights among hotels near Chalon-sur-Saône.

Wine Tasting Experience: the price of the stay includes a wine tasting for 2 people.

Eat your breakfast in the vaulted room on the ground floor or out on the terrace, facing the park. The buffet is generous and varied with a mix of sweet and savoury flavours. Head to the bar to relax or socialise. In the evenings you can eat in one of the authentic Napoleon III rooms (wood panelling, chandeliers, large traditional fireplace). The setting is chic and antique, the cuisine traditional, gourmet and Burgundian.

While the Château Saint-Michel, The Originals Relais is an experience in itself, it would be a shame to miss out on all the cultural and culinary wonders that have made Burgundy famous.

Follow Mathieu with complete confidence. A passionate and fascinating guide, he will guide you through the vineyards and prepare a little taster session of Burgundy wines (including certain vintages).

There are many châteaus and abbeys in the region (Cluny and Cîteaux, to only mention the most famous). For city lovers, Chalon-sur-Saône, a town of art and history and of course the unmissable Beaune and its hospices, a legendary place. For a bit of nature there is the Chemins de Saint-Jacques hiking route or the Canal du Centre. If you’re looking to discover some local wines and their pretty villages, check out the Route des Grands Crus. If you want to go by bicycle, take the Voie des Vignes between Beaune and Santenay.

The Château Saint-Michel, The Originals Relais’s 2 reception rooms are in a traditional setting but with modern equipment (Wi-Fi, projector, etc.). Whatever your need, seminar, congress, study day, assemblies, etc., the establishment’s sales team will organise everything for your event including possible activities related to oenology. You can also enjoy the peace and quiet and beauty of the park for moments of relaxation.

This 90m2 room can hold up to 70 people depending on the chosen seating plan.