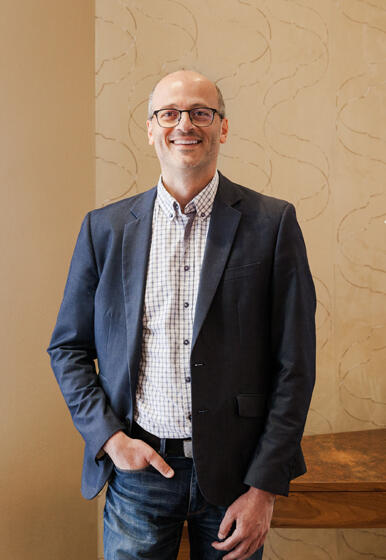 Set just a few metres from the museum of the Peugeot adventure. An establishment offering top-of-the-range services and facilities. Delphine Duriaux welcomes you to her hotel.

Never judge a book by its cover, as the saying goes. This is certainly true of The Originals Boutique, Hotel Arianis Sochaux, Montbéliard East. Its soulless ‘90s façade conceals a 3-star hotel with top-level services and facilities. “Our guests’ satisfaction is a daily challenge. It’s what motivates me and my teams”, stresses Delphine, the hotel’s director. In 2013, the establishment underwent a major makeover. The décor of the 68 rooms and communal areas was entrusted to a young interior designer from the Doubs, who transformed the entire hotel into a chic, urban space. The restaurant was restyled as a classy “bistronomique”, with a new menu designed by a Michelin-starred chef. The Hotel The Originals Montbéliard East Arianis Sochaux is earning its stripes. “We regularly welcome in our Sochaux Hotel top-level athletes (football teams, Tour de France teams), national teams (volleyball, handball), and personalities from the performing arts, politics and business”, explains Delphine with pride.

Spacious rooms with quality bedding, a large desk, air-conditioning, soundproofing, free wi-fi, and “plenty of electrical sockets”, as the hotel’s director Delphine explains. The 68 rooms of The Originals Boutique, Hotel Arianis Sochaux, Montbéliard East are very comfortable, with excellent facilities. The elegant décor, the work of an interior designer, immerses you in a refined world of understated, chic, urban elegance. Families and mobility-impaired guests will find rooms to meet their needs.

The Originals Boutique, Hotel Arianis Sochaux, Montbéliard East has a number of dining areas. A veranda, where a generous buffet breakfast is served. The friendly bar welcomes you at any time, day or evening. And the restaurant. The décor in the 140-cover Carré Gourmand dining room is as contemporary as the food served there. Refined, seasonal cuisine with a regional flavour, from a menu designed by a Michelin-starred chef. There’s a large terrace too, for fine days.

With a menu that changes two or three times a year, and two set menus each day, the cuisine at the Carré Gourmand is simple but excellent. Its compositions are modern, but the local Franche-Comté products used are very traditional in origin. Star dishes include the trilogy of freshly prepared knife-cut beef tartare. “Connoisseurs will love it”, promises Delphine. Please note: the restaurant is closed on Friday nights, Sunday nights, and all day on Saturday.

Located right by the museum of the Peugeut adventure, The Originals Boutique, Hotel Arianis Sochaux, Montbéliard Eastis the ideal base for discovering the finest local products, and makes a great stopover on a journey through the Doubs.

The hotel’s air-conditioned gym can be accessed 24/7, providing professional equipment for working out or relaxing.

Open to all, the work area is designed for anyone in need of a quiet place for a few minutes’ work, or simply wishing to browse the internet. A laptop computer is available on request.

The museum of the Peugeot adventure, right next to the hotel, where you can learn about the epic automotive adventure of the lion brand; the Axone, the entertainment venue where the region’s major cultural and sporting events are held; the Bonnal stadium, home to FC Sochaux; the very beautiful castle-museum of the Dukes of Wurtemberg at Montbéliard; Mont-Bart fort, a vital link in a defensive chain constructed after the defeat of 1870; the Gallo-Roman Mandeure theatre, whose four tiers seated 18,000 spectators in days gone by; the church of the Immaculate Conception at Adincourt, one of France’s first reinforced concrete churches built in 1932.

Nice Hotel but the WiFi was VERY slow. Not able to perform a Video Call.

Nice hotel with restaurant and Intermarch within walking distance

Excellent! Charmjng staff, nice room Tidy and clean. :) I would recommend it.