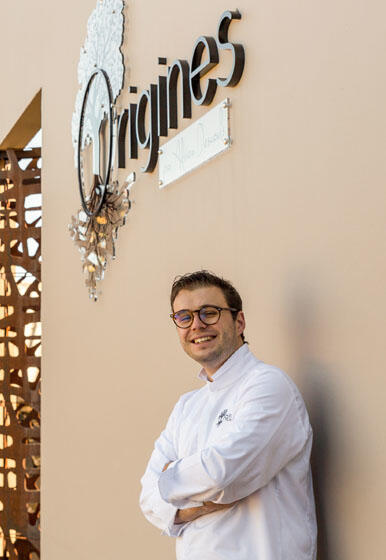 “Experience something extraordinary in this very special setting.”

A lot of hard work has gone into this place, returning to Auvergne, to the land he grew up in. Having trained at hotel college in Chamalières, followed by 5 years in Paris working with some of the biggest names and one big media boost later (having been a Top Chef 2018 semi-finalist), Adrien’s big dreams finally came true. Origines par Adrien Descouls, The Originals Relais 6-room hotel-restaurant opened its doors in July 2018, high up in Broc, a country village just 6km from Issoire. A modern construction adjoining the old 13th century castle ruins, the location itself is far from typical. “Ultra-high-quality design with a large bay window offering panoramic views over the Cézallier mountains. The building is surrounded by ancient ruins, creating a truly magical world up here!”. And magic can also be found in sampling the traditional French cuisine served up with just a touch of modernity. “My food is authentic, generous, technical and gourmet”. In going back to his roots, he’s not doing too badly!

There are just 6 spacious yet warm, comforting and peaceful rooms here. Just like the rest of the building, here, design reigns supreme. Elegant materials, clean lines and luxurious facilities. A tranquil, relaxed and laid-back atmosphere, all looking out over the chain of Auvergne volcanoes and the Cézallier plains. Nothing can disturb the peace here. One room has also been specially adapted for guests with reduced mobility.

Gourmet experience: the price of stay includes a gourmet dinner and a breakfast for 2 people. Wine and food option is available according to  establishments, with extra charge.

Welcoming and impressive, the Broc restaurant at Origines par Adrien Descouls, The Originals Relais sets itself apart with both a sleek and well-rounded aesthetic. White tones, blonde woods and panoramic views over the natural surroundings. A feast for the eyes, as well as your tastebuds, you can immerse yourself in authentic and gourmet flavours from breakfast to dinnertime starred by Michelin guide. Auvergne is truly put in the spotlight here, along with the diversity and quality of local produce. To take some time out and relax in pleasant surroundings, make sure you also try our Broc bar.

In his logo, Adrien included a circle. A circle that symbolises all the members of his team, including a star pastry chef, a distinguished sommelier and a renowned restaurant manager, all former comrades. But it’s also about his suppliers: “we work with a huge number of local producers, all within a 50km radius. Even the flowers on the tables are from these parts!”. His restaurant has a star with a Michelin guide.

Please note, our hotel restaurant in Broc is open from Wednesday lunchtime until Sunday lunchtime

More than just a place to admire, Origines par Adrien Descouls, The Originals Relais is an amazing tasting and sensory experience for everyone who stops by. A great starting point, or stopping point, on the many journeys of discovery that wind through the Puy-de-Dôme region.

Among the many extraordinary experiences on offer, Origines par Adrien Descouls, The Originals Relais also organises wine tasting sessions in the restaurant’s cellar. Certainly not an opportunity to be missed for the beauty of the space alone, you’ll also hear advice from the expert head sommelier who specialises in spirits.

Visit Saint-Austremoine d’Issoire Abbey, a masterpiece of Auvergne’s Romanesque style; travel through Usson and Montpeyroux, the two most beautiful villages in France’s Puy-de-Dôme region; play cowboys in Auvergne in the Valley of the Saints, often compared to the steppes of Mongolia or even the Scottish highlands, these lands, far removed from the hustle and bustle of the busy tourist areas, leave a lasting impression on everyone who visits; meet the animals at Auvergne Animal Park in Ardes-sur-Couze; or perhaps become a treasure hunter for the day as you explore the region’s amethyst ridges.

We booked for two nights and the whole experience exceeded our expectations. The staff were all really friendly and went out of their way to make it an enjoyable stay. The location of the hotel is amazing, built into the ramparts of a medieval chateau. The room was spotlessly clean, the bed was blissfully comfortable and it was extremely quiet. The room, which had a small balcony, looked out onto the medieval wall with a view of the countryside through a gap. The food in the restaurant was stunning, each dish was exquisitely presented, inventive, subtle yet packed full of flavour. There is an excellent wine list. The jewel in the crown is the incredible view from the restaurant across to the mountains. We were only going to eat on one night but ended up eating on both nights. Alex and Clermont were excellent hosts and all of the staff in the restaurant were lovely.

A great deal of thought and skill had gone into the design and flavours of the food. Loved the view from the windows. Helpful and attentive staff but not intrusive. Look forward to returning on our travels from England next year.

A warm and friendly welcome, a fabulous room and g a meal to remember. I hope we get to stay at Origines again.

"Fantstic stay in this hotel !"

Beautiful rooms with all the comfort you need Fantastic panoramique view over the valley and mountains Breakfast was excellent ! Make sure you take exit 15 and not 14 otherwise you’ll have to drive through the beautiful mediaval village with very narrow streets, very steep (experience of a rollercoaster

"Our stay in Origines"

Modern with an area of 25m2, Origines par Adrien Descouls, The Originals Relais function room can accommodate up to twenty people when seated. With all-new equipment, its peaceful setting and the range of services available make it the perfect place for all your professional events in an exceptional location. If you’re looking to give your employees or customers a truly unique experience, you’re certainly in the right place.