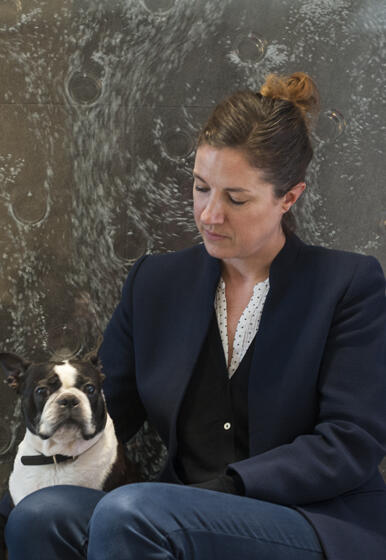 A family establishment at the heart of the Marais. Welcome to Juliette Barilleau's hotel.

"Warmly welcoming guests, listening to them and ensuring an unforgettable stay in the capital."

The Originals Boutique, Hotel du Vieux Saule, Paris Le Marais. The name rings out in the heart of Paris where the little streets are often lacking in trees. The willow (la saule) was planted by Marie-Thérèse (daughter of Marie-Antoinette, who later became the Duchess of Angoulême) at the site of the tower where she was imprisoned with her parents and brother, Louis XVII. She was the Royal Family's only survivor. The willow and the prison have disappeared but the memory remains. That of the queen with the tragic fate and that of Juliette's family which has run The Originals Boutique, Hotel du Vieux Saule, Paris Le Marais since 1984. "After studying logistics and finance, I took over the family business." A very modern hotel, the recently renovated three-star establishment offers 26 comfortable and peaceful rooms with a contemporary design. The hotel is popular for its amenities, location among hotels near Eiffel Tower, and excellent hospitality. Simple, warm and family-run.

Spread over five floors, the 26 rooms at The Originals Boutique, Hotel du Vieux Saule, Paris Le Marais are quiet and comfortable. Parisian dimensions mean some are on the smaller side, but all are charming with their contemporary design and varying themes, from elegant to exotic Paris accommodation. A lift is available to access the rooms but claustrophobes, beware. The owner, Juliette, admits that "it's one of the smallest lifts in Paris!".

For your business trips, discover our business offers including an overnight stay with breakfast and/or dinner.

The Originals Boutique, Hotel du Vieux Saule, Paris Le Marais offers no meal options. But the wide variety of gourmet establishments in the neighbourhood more than makes up for it. If you're all out of ideas, Juliette and her team have a list of restaurants available at reception. The breakfast room sits in the basement at the bottom of a spiral staircase. Gather your strength from the continental breakfast in a pretty vaulted 18th-century cellar, then take Paris by storm.

Paris is a unique experience in itself and the Marais neighbourhood home to The Originals Boutique, Hotel du Vieux Saule, Paris Le Marais is an iconic, historic and very lively district. At the heart of Paris, the capital is there for the taking.

Enjoy some self-care after a day of working or sightseeing in the capital in the hotel's relaxation area. There you'll find a sauna, a balneotherapy tub and a Powerplate machine accessible from 8am to 10pm.

An authentic, trendy, lively sightseeing district, the Marais is one of the capital's must-visit places. Dream in front of the legendary Place des Vosges, do some shopping in the Forum des Halles and admire its canopy or refine your contemporary artistic culture at the Pompidou Centre. But the best way to spend your time is to wander the ancient streets and alleys, putting your finger on the pulse and feeling the beating heart of a celebratory Paris open to arts and the world.

The staff were very pleasant, helpful and efficient. My room was compact but cleverly laid out. I enjoyed my stay and I highly reccommend the hotel, especially in this price bracket. In general the room was very clean, although the duvet cover had a couple of small old blood stains on it (it was clean, they were just stains that didn't wash out obviously). Glass shower doors would be nicer because in a compact shower the shower curtain can stick to you. The 2x halves of the bed which join to make the big double aren't very well attached together so you can feel the gap in the middle